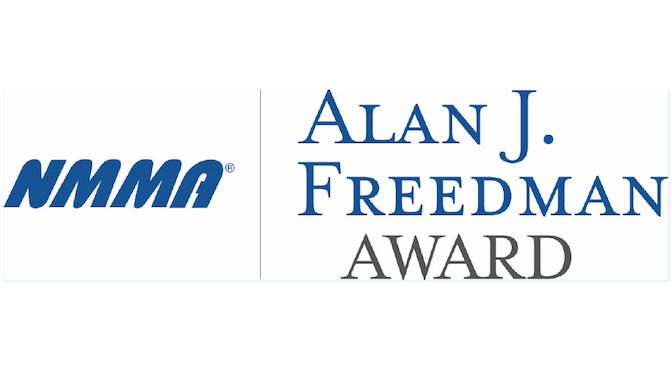 John Thommen, left, Founder and CEO of Ocean Marketing, with NMMA President Thom Dammrich during the award ceremony at the 2019 Progressive Miami International Boat Show. "I was ecstatic," Thommen said. "I was so pleased that I was being recognized for a lot of years and hard work."

Thommen is the Founder and CEO of Ocean Marketing, an independent manufacturing representative group that provides professional marketing services in the form of sales development and technical support for both aftermarket and, more recently, OEM accounts.

“NMMA is honored to present John Thommen with the 2019 Alan J. Freedman Award for his dedication to the marine industry and his pursuit to deliver quality, safe products to the marine market,” noted Thom Dammrich, NMMA president in the award press release. “John’s unwavering commitment to marketing and providing instruction on the proper use of marine products to dealers, retailers and end users has resulted in better safe boating practices, and is a testament to his lasting mark on the industry.”

For the past 28 years, Thommen and his ever-growing team of marine industry pros have provided TACO with extensive aftermarket business support – helping to develop our distributor, dealer and retailer programs while also providing technical support to consumers and OEM.

“We were hired when TACO first introduced an aftermarket program,” recalled Thommen, who came onboard with TACO 28 years ago. “That led to many different, exciting projects, including some very big aftermarket hardware programs with major retailers, like West Marine, and then very large programs once we got into the sport fishing business with Bass Pro Shops and similar sport fishing-oriented retailers.”

“When John has been challenged with an opportunity from a customer, he is always able to work on a win/win solution for both the customer and the factory,” said Taschioglou. “It has been a real pleasure to work with and get to know John over these years, and I look forward to many more years to come.”

TACO VP Mike Kushner said there is one word he uses to describe Thommen and his work ethic, which is “progressive.”

“He’s always been very progressive in his approach to marine merchandizing and retail,” said Kushner. “He’s really into planograms (visual representations of a store’s products), layout, designs and the whole look. When I think back to the ways [marine] retail stores used to look, he really helped improve the whole image.”

Despite working with TACO for nearly 30 years, Kushner said Thommen never once slowed down. Instead, he has continued to grow and expand his company and the areas it covers – branching from primarily the mid-Atlantic to covering the entire East Coast, the Mid West and eventually the nation with major retailers and companies alike.

“John and his organization have always exemplified professionalism in whatever they are involved in, whether it be customer visits, shows or training seminars,” said Taschiolgou. “During his 28 years [with TACO], it has been more than work. It is the relationships that John has developed over the years with myself, the company [and] in the industry as a whole.”

Thommen credits Ocean Marketing’s success to finding the right team – a group of marine enthusiasts who not only understand the products and merchandizing, but who are also out on the water enjoying the industry.

“All of us are boaters,” said Thommen.  “Some of us are sailors, some of us are power boaters, [but] we understand the entire total boat concept.”

Kushner agreed and said Thommen’s enjoyment of the water is a testament to his passion for industry.

To be nominated for the award, the NMMA said recipients are individuals who, “in the course of their careers, have made outstanding contributions to the marine accessories industry through leadership, creativity and personal motivation.”

For Kushner, he said he believes Thommen is very deserving of such an accolade.

“He’s spent his entire carrier helping not just manufacturers and companies like TACO, but also the dealers and the retailers themselves grow their businesses and be more professional,” said Kushner.

“I wasn’t really surprised that he won the award,” he added. “He’s been in the industry for over 30 years and I think that it’s well deserved.”

Receiving the Alan J. Freedman Memorial Leadership Award was, Thommen said, a validation of what he and his team do.

“It’s a validation of the partnerships that we have with our factories like TACO,” said Thommen. “It’s a validation of our relationship with customers, and certainly a recognition that our employees have become part of the culture of working hard with a high degree of integrity.”

From all of us at TACO Marine, congratulations John!