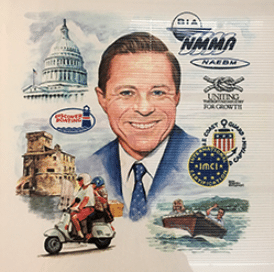 The following is from the National Marine Manufacturers Association – remembering former NMMA President Jeff Napier, who passed away Tuesday after battling Parkinson's disease.

NMMA is mourning the loss of former NMMA President and Hall of Fame recipient Jeff Napier, who died Tuesday at his home in Italy after battling Parkinson’s disease. Napier served as the first President of the NMMA beginning in 1980, with a myriad of accomplishments during his career that have left a lasting positive effect on the vitality of the boating industry.

In 1964, Napier started his career in the recreational boating industry as a lawyer and lobbyist for the Boating Industry Association (BIA). As the lawyer for BIA, Napier performed much of the legal work to merge the association with the National Association of Engine and Boat Manufacturers (NAEBM) to create the NMMA.

During NMMA’s early years, there were about 450 members, which produced four boat shows and had no Washington presence. By the early 1990’s, under Napier's leadership, NMMA grew to include 1,800 members, a staffed Washington office with additional state lobbyists, and more than 20 boat shows.

In addition to producing hundreds of boat shows, Napier created the original boating industry political action committee in the 1970’s. In the face of non-tariff barriers that threatened NMMA member exports, he created the International Marine Certification Institute (IMCI), gaining recognition for the association by the European Union, which led to European certification of NMMA member products.

“A friend, colleague and mentor, Jeff was a visionary who helped push the boating industry forward in so many ways. Jeff understood the need for the boating industry to own and control major boat shows to give the industry a voice in how they were produced, and also saw how shows’ revenue could support other industry initiatives and ultimately grow boating,” said NMMA Executive Vice President Ben Wold. “He was always so supportive of NMMA members and its staff, and a mentor to so many of us who have enjoyed long careers in the boating industry.”

Using his ability as a consensus builder, Napier helped establish the direction for the Uniting the Industry for Growth campaign, which provided dealers an open forum to meet with manufacturers to discuss sensitive issues, including warranties and dealer agreements. He also convinced NMMA’s board to fund extensive research programs, which exposed challenges the industry was facing and identified the steps that needed to be taken to turn it around. These were the seeds that have since grown into the Grow Boating efforts underway today.

“Jeff’s leadership played a key role in the growth and success of NMMA, devoting his entire career to bettering the boating industry and community. He reached out to me often during my tenure as NMMA president to share his experience and insights; caring deeply about the industry and the people long beyond his tenure at NMMA,” noted NMMA President Thom Dammrich. “On behalf of NMMA, we offer our deepest sympathies to Jeff’s family on their loss.”