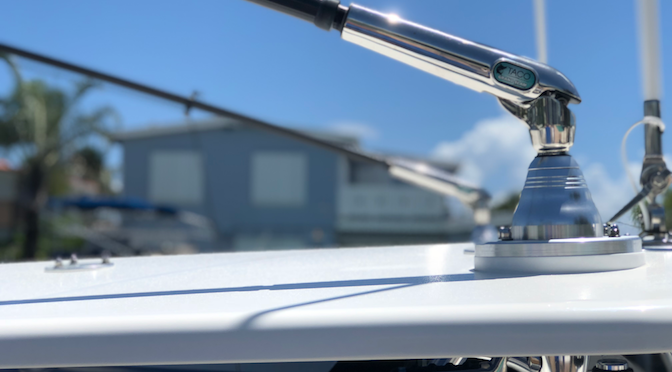 As we continue to celebrate our 60-year anniversary in business, we want to recognize two individuals at TACO who have directly influenced the success and popularity of the Grand Slam Mount product line – Frankie Phy and Jeff Pace.

70,000 – That’s the approximate number of Grand Slam Mounts that mainly one man built over the better part of the past 10 years. Meet Frankie Phy, TACO Fabrication Assembler and undeniable Grand Slam master.

Although Phy’s predominantly been a one-man act for the majority of his 12-year career at TACO, Jeff Pace trained with and joined him one year ago as the second Grand Slam Fabrication Assembler – helping to double mount production as the sport fishing line’s popularity exploded.

Jeff Pace, left, and Frankie Phy are the dynamic TACO duo who build every Grand Slam Mount from the 280 and up.

Together, Phy and Pace, both Tennessee natives who work in our Sparta main manufacturing warehouse, build an average of 200 to 300 individual mounts per week, which can fluctuate depending on the Grand Slam model.

For example, Phy said the new Pro Series GS-500, with its separate rotation and lifting handles and unique patent-pending Twist & Lock arm, is a more complex design that takes longer to build than the industry staple GS-280.

Part art and part science, Pace said he and Phy have the Grand Slam building process down pat.

Instead of building mounts individually, Phy begins step one while Pace prepares step two. When Phy finishes with step one, he prepares step three while Pace gets to work on step two. And on and on they work in that fashion all the way through to the end of the build, which involves testing, cleaning and packing the mounts.

“We begin with the top tube,” said Phy, while describing the GS-280 build process. “The top tube will be what the arm screws into. Then we add the plate with an adapter, [and] then the rotator and then we’ll place the arm in the tube. Once we get the arm in, we’ll check it to make sure it rotates properly."

“The 380s are more complicated,” he added. “We have to install a crank at the bottom, which raises the elevation of the arm up and down.”

Because he’s assembled Grand Slams for so many years, Phy admitted with a laugh that he could build them in his sleep.

TACO VP of Manufacturing Bill Kushner said the Grand Slam build process is not only involved, but requires checking all the individual components for quality prior to assembly.

“We want to test and check [the components] each individually and put our stamp of approval on them,” said Kushner.  “Whether we’re putting together 200 pairs or two pairs, [Frankie and Jeff] put the same attention to detail into everything they do.”

It’s Phy’s almost-obsessive attention to detail that Operations Director Pedro Rosa said makes him so great at his job.

“He’s a key component, not just in building Grand Slams, but the life of the Grand Slams and troubleshooting the design, if needed,” said Rosa. “He’s very invested in the product.”

Although Pace is relatively new to the Grand Slam process, Rosa added that he is the perfect fit for the role alongside Phy.

“We put him there to cross train and we noticed that Jeff was just as good as Frankie,” added Rosa. “He picked up on it right away and we decided to create a team with just those two.”

“I like building Grand Slams because you stay busy all day,” said Pace. “You’re constantly putting something together. It’s constant movement and you’re not standing still.”

Despite Phy and Pace knowing every Grand Slam model inside and out, neither is into sport fishing.

Instead, Phy spends his free time raising cattle while Pace enjoys working on his car. Additionally, both men are married and like spending time with their families.

Phy and Pace’s direct boss, Production Supervisor Jerry Farley, had nothing but praise for the TACO Grand Slam duo.

“Frankie and Jeff are outstanding employees,” said Farley. “Frankie strives to make quality products and he’ll do anything and everything that you ask of him. Jeff is another go-getter and will do absolutely anything asked of him and then some.”

Looking to the future, Rosa said the Grand Slam production area was recently redesigned to make room for the new GS-800, GS-900, award-winning GS-1000 and two as-yet announced electric mounts, which are debuting at IBEX. The redesign, he said, provides Phy and Pace the capacity they need as the product line continues to grow.

At the end of the day, knowing that he and Pace are accomplishing something is what Phy said makes his job worth doing and enjoyable at TACO.

From all of us at TACO, thank you to Frankie Phy and Jeff Pace for their unwavering commitment to our core values – Innovation, Quality and Service – in all that they do. It is because of their dedication to making the best Outrigger and Center Rigger Mounts on the market that the TACO Grand Slam line is where it is today.