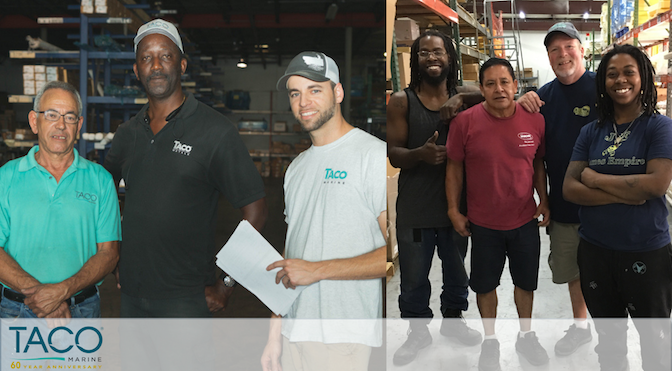 Since 1959, the headquarters of TACO Metals, the parent company of TACO Marine, has been located in South Florida. And while the company’s roots have spread far and wide – branching out with other facilities in Florida, Tennessee and South Carolina –, one core faction of the business has helped drive TACO forward – the Florida Warehousing & Distribution team.

Blink and you’ll miss him! 21-year TACO veteran Mario Cabreja is always on the move – dashing around the warehouse fulfilling orders, zooming up and down aisles in a forklift rotating and organizing product or even scaling ladders with paint and a brush to help renovate the TACO headquarters. Whatever the warehouse or facility task, Mario will get the job done.

“I like to move around,” said Mario, TACO Material Handler. “I know I’m not a good person to sit down at a desk because that’s not what I’m used to doing in my life.”

From left to right, Mario Cabreja, Dwight Bailey and Nick Cabreja in the TACO Miami warehouse.

Prior to joining team TACO, Mario worked at a South Florida country club where he met TACO Founder Dave Kushner.

Kushner, he said, was impressed with Mario’s work ethic and began hiring the him for maintenance jobs on the weekends. A few years later, after getting to know the entire Kushner family, Mario became a full-time member of TACO.

“First, I was making coffee for the whole entire company and delivered coffee to each department,” said Mario. “After that, [I began] cleaning all the offices and, in my extra time, helping the maintenance department.”

Eventually, Mario became an expert on assembling TACO Grand Slam Outrigger Mounts and other marine products. In 2007, he spent three months training the new Grand Slam team in Sparta, Tennessee when the company moved its main manufacturing and distribution operation to the town an hour east of Nashville.

Despite the variety of roles at TACO throughout the years, Mario said he is happy with his job.

“I love TACO,” he said. “Anyone who works for TACO always has the opportunity to learn and grow. I’ve had opportunities with TACO to travel and learn, and I’m happy.”

If you’ve met long-time TACO Driver Dwight Bailey, you know you’re more likely to see him behind the wheel than in the warehouse. In fact, Bailey has delivered TACO product to customers throughout Florida and beyond for the better part of 26 years.

On any given weekday, Bailey makes anywhere from 10 to 15 deliveries in the TACO truck – no, not a food truck, but a semi with a 28-foot long truck bed that is often full of the company’s finest products, including Rub Rail, Sport Fishing mounts and accessories, piano hinges and just about anything else made for metal or marine manufacturing.

At one time, when the company had an Illinois warehouse, Bailey would make the 2,500-mile round trip journey on a regular basis. He’s even delivered TACO products to Massachusetts, Tennessee, South Carolina and many places in between.

“I’ve done quite a bit of driving,” Bailey said matter-of-fact.

Despite racking up an average of 1,200 miles per week, Bailey said he doesn’t get sick of driving the truck. In fact, it’s when he’s behind the wheel of his personal car that he feels out of place.

“Driving long distance in the car, to me, is more uncomfortable than driving in the truck,” he said. “The truck is made for that. I could sit in the truck and drive and drive.”

A former Senior Airman with the United States Air Force with years of military and private company warehouse experience, Nick joined team TACO in the fall of 2018.

Nick works primarily with Mario, Bailey and Material Handler Joe Zamor. Together, this TACO dream team is working to overhaul the South Florida warehousing process by implementing new programs he utilized during his time in the military and beyond.

“When I first came in, I took a step back and watched how the team’s workflow and process was done,” Nick explained. “I observed it, reviewed it and looked for what changes could be made to improve the way things are done in Miami.”

Some of the changes include how products are packaged for distribution, the process for receiving and also the overall warehouse organization.

Nick said the benefits to inheriting an experienced team is their knowledge, dedication and integrity in all that they do for TACO.

“My team is always on the move,” he said. “We’re constantly looking for what’s next to complete, change for the better, and what future projects we can start. A team like this, I believe, is what betters a department as well as the company.”

Also in Florida is the Largo Seating Manufacturing & Regional Warehousing team, which is lead by Warehouse Manager Charles Upmeyer – a Florida transplant from the company’s Sparta, Tennessee location.

Making the move from the Volunteer State to the Sunshine State was a no brainer for Upmeyer, he said, who made the change almost one year ago.

“A job became available down here and I talked to the fiancée about it and she said, ‘Florida? Heck Yeah!’” exclaimed Upmeyer. “I went through the interview process and was offered the position and moved on down here.”

In addition to managing warehousing and distribution for the northern half of Florida and its surrounding states, Upmeyer also oversees the marine seating inspection process.

Because of his role, Upmeyer works closely with Nick in Miami as well as the Warehousing & Distribution teams in Tennessee and South Carolina.

“We interact mostly on a daily basis,” said Upmeyer, who added that regular communication with the entire team is vital to his department’s success. “Verbally, it helps tremendously when we can get a headstart on an order.”

Beyond moving product and inspecting orders, Upmeyer said he believes the TACO Warehousing & Distribution team is an extension of Customer Service because of their regular interaction with customers.

“Customer service doesn’t stop with the Customer Service department,” Upmeyer said. “It trickles on down to us. So whatever we can do at our end to fulfill our customers’ needs, that’s done throughout the day as well.”

TACO Driver Tomas Perez echoed Upmeyer’s thoughts on customer service and said interacting with and helping customers is one of his favorite things about the job.

“I talk to customers everywhere I go,” said Perez, who is celebrating his 20th year with TACO in May. “I have a good relationship with everybody everywhere I go. I enjoy the job. I like dealing with people.”

Like Bailey in Miami, Perez said he makes an average of 10 to 15 deliveries a day. However, because he often drives farther distances, his weekly mileage average is close to 2,000, and sometimes more.

From all of us at TACO, thank you to Mario, Dwight, Nick, Joe, Charles, Tomas, Cherinese James and Ameer Dozier of the Florida Warehousing & Distribution team. Your work ethic and dedication elevates the overall success of TACO – raising the bar for the company and setting a high standard for the industry as a whole.