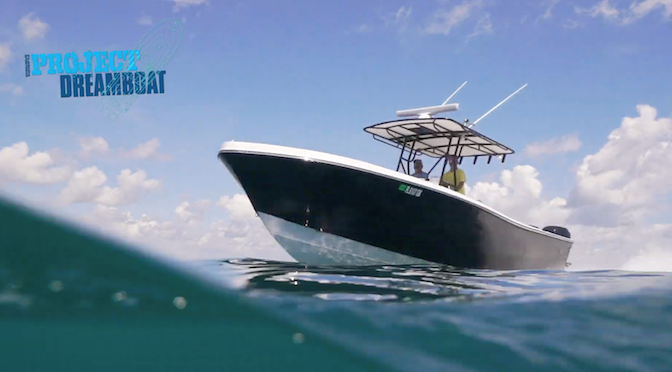 In the latest episode of Florida Sportsman Project Dreamboat, the professionals at Wildfire Marine in Stuart, Fla. install new TACO Rigid Vinyl Rub Rail on a 25 Mako, which is being restored on the show.

Wildfire Marine Owner Mike Sternberg explained that new Rub Rail was the next step in restoring the boat after he and his team closed the transom.

Starting on the port side of the boat, Sternberg attached the first 20' section of V21-9501 toward the back of the boat – making sure to leave enough of the Rub Rail at the stern to fold into the transom.

First, Sternberg attached the Rub Rail on the port side of the boat toward the back, leaving enough of the profile to wrap around the transom.

Because of the transom's sharp 90º angle, Sternberg explained that he had to carefully heat the Rub Rail while slowly bending it into the stern to ensure it didn't lose its shape. Additionally, he cut a piece of starboard material that matched the curve of the transom to better mold the Rub Rail to the boat.

Sternberg carefully heating the profile at the corner to enable it to bend along the boat's transom curve without deforming.

Sternberg bending the Rub Rail toward the transom.

Sternberg inserting the cut piece of starboard into the profile.

Sternberg used a cut piece of starboard material to help form the profile to the transom curve.

After successfully bending the Rub Rail along the transom on the port side, Sternberg and his team attached the rest of the profile to the boat. First, he mounted the Rub Rail, which is pre-drilled, by placing a screw every five or six feet. Then, he and his team doubled back and installed the remaining screws after the profile was mounted all the way around the boat.

Sternberg and his team installing the rest of the profile around the boat.

After the profile was completely mounted, Sternberg and his team installed the insert. Because it's a stiffer insert, he first clipped it in place around the boat and then gently heated 12" at a time and used a flat putty knife to carefully push the insert into the profile.

If you don't have a heat gun, TACO recommends setting the insert on a clean surface in the sun or submerged in a hot water for 30 minutes prior to installation.

Showing the insert clip in place around the boat.

Sternberg using a putty knife to carefully push in the insert.

"It is an excellet Rub Rail," said Sternberg. "The insert actually sticks out almost three quarters of an inch, which the insert is going to take almost all of the abuse."

An up close image of the completed TACO Rub Rail and insert around the boat's transom curve.

Watch the full episode below.